The latest buzz surrounding online bingo is the new Bingo Millions game that is now available to play. With a huge jackpot that totals more than £1.5 million, this is certainly a game that catches the eye. You can play all versions of this game at Buzz Bingo while other bingo sites have just the 90 ball version of the game.

Play Bingo Millions at Buzz Bingo and get £30 of free bingo with no wagering requirements when you spend £10.

Deposit £10 and get 48 free Bingo Millions tickets at Zeus Bingo.

Enjoy bingo rooms from Pragmatic Play plus Bingo Millions games to play with a £10 deposit.

Get up to 500 Free Spins on Fluffy Favourites with your first deposit and spin the Mega Wheel.

What is Bingo Millions?

If you haven’t heard of Bingo Millions before then this is a game that has been created by the developers Mutuel Play. The game was introduced on the Buzz Bingo website back in April 2019 and has gone from strength to strength. 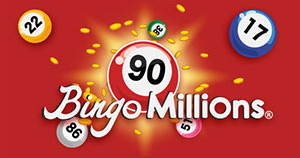 The 90 ball version of the game came first and was played twice a week by players. Then a new, instant win version of the same game became available followed by two 80 ball games and two 75 ball games.

The 90 ball versions are available to play on many bingo sites and we are expecting these games to be available on even more sites in the future.

The biggest feature of Bingo Millions is the progressive jackpot on offer for the game that is played twice weekly. This is seeded at £1.5 million, while the instant win version of the game has a fixed £1 million jackpot.

How To Play Bingo Millions

Playing Bingo Millions is the same as playing regular bingo. The one difference the game formats have is how the prizes are given to players.

When playing the Millions game, the prizes are fixes. These are given out for the full house in a set number of calls, and also for lines on the 90 ball game and columns on the 80 ball game.

It doesn’t matter how many people win, the game does not stop until the number of balls needed are all called, and the prizes are never split between players, except for the jackpot.

To win the jackpot, you need to have a full house in less than 30 calls, doing this is incredibly difficult, so two people doing it on the same game is highly unlikely to ever happen.

Even if that was won, the game still goes through the numbers to give other players the chance to win their smaller prizes as the game progresses. Remember, everyone who wins a prize will get their full prize for anything other than the jackpot, so others winning is great to see and doesn’t harm your prize.

How is Bingo Millions different from regular bingo?

When playing the Bingo Millions game you will find yourself with something that looks and feels like the standard bingo game you know and love. However, while that is the case on the outside, when you dive deeper there is something completely different going off here.

The first thing to look at is fellow players inside your room. In regular bingo, you need these players to boost the prizes but they also give you a smaller chance of winning as more people have tickets.

In Bingo Millions, neither of these happen. You don’t need players in to play because the prize is not affected by how many people buy tickets and more than one player can win, so they don’t have an impact on your chances of winning.

Regardless of whether you are alone or with 100 other people, the prize on offer and your chances of winning remain the same. The game is you vs the house, and if there are 100 players in the room, there are 100 individual games vs the house, each not affecting the others.

The Odds of Winning

We know the prize fund, we know how the game works and we also know that more than one player can win prizes every player could win a prize of some description.

But what are the actual odds of winning the £1.5 million jackpot on offer?

The figure given for winning this is 1 in 295 million. This is based on the 90 ball game, and the 80 ball game is expected to be similar to that, though not quite the same.

The odds on offer here give you more chance of winning than any million point sliding jackpot games we have seen in the past, but the odds are not as good as other things.

For example, the odds of winning the UK lottery jackpot are currently 1 in 45 million. The chances of winning are far better, and the jackpot on offer is often bigger in this case.

What Bingo Millions does have on its side is the fact that other prizes are available for players, and also the fun element, this is a great and fun game to play, far better than checking up on the lottery results.

The game has shown itself to be a success so far, and it is expected to move out onto more bingo sites in the future because of that.

The prize tables below detail the latest available prizes on the Bingo Millions games for those who are interested in trying their luck with this exciting game.