When the game first hit the web, there were just two mainstay bingo games to pick from – 75 ball and 90 ball, but as interest in playing bingo has grown with more new online bingo sites, so have the number of options available to players.

This page will provide you with a little more information about each type of bingo game that you can play online today. It’s worth noting that whilst there are now quite a substantial amount of bingo variants available to choose from, not all appear on every single site. Additionally, a bingo game type listed here may vary in name from brand to brand too. 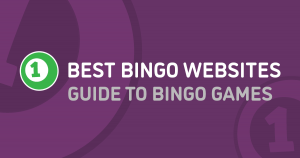 90 ball bingo is available at all of the UK facing brands and the game that is the mainstay of the land-based bingo halls.

Of all the games, it is the one with the most numbers and some say that it is the most popular of games the world over. We think the Americans would say differently.

There are just 15 numbers on a 90 ball bingo board and the grid is 3 x 9, three rows all with nine squares on. Each row contains five numbers and four blanks.

On the traditional 90 ball bingo game, there are three ways of winning and they are:

The 75 ball bingo game type is most popular in America but it was introduced to UK bingo brands pretty quickly after the bingo game arrived online. This was because when the Internet first offered bingo there wasn’t an Unlawful Internet Gambling Enforcement Act (UIGEA) and the game was available online in the USA too. In 2006 the UIEGA was introduced but the UK bingo sites continued to embrace the game.

The original 75 ball bingo game types were patterned games and to win any game, you had to match the pattern shown at the top of the screen. However, as time has progressed, and the online bingo landscape has changed, 75 ball has evolved into a multitude of variants.

Whatever variant you are playing, a 75 ball bingo board consists of five rows and five columns. All squares have numbers except for the middle square; this is a free square.

The columns are labeled B, I, N, G and O and the numbers listed under each column are: 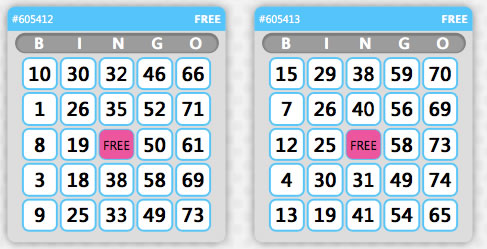 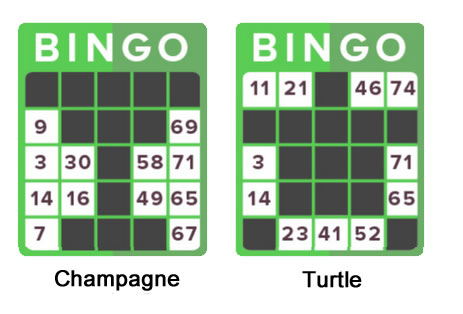 There is just one prize offered on the traditional 75 ball pattern bingo.

When it comes to the multi-part bingo, this is not quite as popular as the pattern bingo and not found at very many bingo sites at all. All that differs between this bingo game type and the pattern bingo is that you would usually play for three different prizes.

This would usually consist of play for a line, either horizontal or vertical, and then a pattern and the final prize would be for the full house.

75 ball bingo with five chances to win on each game has been called many things since it’s introduction to the world of online gaming. Some bingo sites call it Swedish Bingo, others Multiline and it has also been referred to as Flash Fives.

The bingo board for multiline bingo is the same as the 75 ball patterned game but instead of playing for a pattern, you play for lines in the same way as you would for 90 ball bingo. Except there are FIVE chances to win and not just the three that 90 ball offer.

When you take a look at a 30 ball bingo board, it’s easy to see why this version has been nicknamed ‘Speed Bingo’! Each ticket contains just nine numbers with a maximum of 30 to be called in each game.

The bingo ticket for the 30 ball bingo game type is made up of three rows and three columns. You will find the numbers one to 10 in the first column, 11 to 20 in column two and 21 to 30 in the final column.

How to win is determined by the site you are playing at but the main option seems to be a full house win only. However, with two rows available, it might be that they play for a one line winner and then the two house winner.

Speed Bingo isn’t found at every site online today and tends to be limited to the titles under the ElectraWorks (Cozy Games) hat.

With fewer numbers in the game, the games are fast-paced and you will spend more playing them but simply because there are more games in an hour than any other game online.

Example image is taken from Tombola

50 ball bingo is available at some brands but not all. It’s a game whose bingo ticket has just two rows and five columns with two chances to win usually One line and Full house.

bingo 60 - the game with five chances to win

60 ball bingo is a game that was introduced to the world of online bingo by tombola and currently, it’s the only brand online to offer this variant.

Bingo 60 isn’t played on one board but five and with five chances to be a winner on every game. The five tickets are coloured and each with a different number or numbers on.

The lesser the numbers on the bingo ticket, the lower the prize value with the top prize for 60 ball bingo being on the ticket with the most numbers.

As online bingo took on land-based bingo when it first launched, it was inevitable that they took to offering a popular game from the bingo halls. Shutterboard or Cashline is played in bingo halls in the interval between main book games but in the world of Internet bingo, it can be played anytime.

An 80 ball bingo board contains just 16 numbers across four rows and four columns. Winning ways vary from brand to brand as some will offer you a one line and then full house option whilst another may just allow the full house prize.

Other variants we have seen over the years include the four corners. Details of the prizes and ways to win will be available at the site that you choose to play at before the game gets underway.

This is bingo, but not as you know it! It has lesser balls than the most traditional of games and the tickets certainly don’t look like a normal bingo card.

To win a game of Cash Cubes Bingo, you need to complete a cube.

A site that offers this game is William Hill Bingo.

The themed bingo game types that are offered by a selection of sites have a twist to the traditional game. The twist might be that they have fewer bingo balls in the game or that they boast bonus features. What they all have in common is that have a theme

This was first introduced on the Virtue Fusion network but is now available on the ElectraWorks software. The game doesn’t have your traditional bingo ticket to play on; instead, it has two shamrocks each with four numbers in.

The game boasts bonus features as well as the standard way to win by marking off all the numbers on the tickets (shamrocks).

For more details of this game and how to play, we suggest visiting a site that hosts the game – for example, Gala Bingo.

Noel Edmonds hosted the popular TV game show until 23rd December 2016 and before it ended, game developers created slot games, scratchcards and eventually, a bingo game based on the show.

When you play Deal or No Deal Bingo it’s a normal 75 or 90 ball bingo game but with bonuses available!

As the standard game progresses, the corresponding box is removed from the game. Prizes are awarded for the one line, two lines, and full house but for the full house winner, there is an extra game to be played.

The banker makes a virtual call to the player and offers them a value for their lucky box and then it’s put to the vote amongst other players in the room. Of course, the decision of whether there is a Deal or No Deal is up to the player who won the full house.

Whether you watch the popular ITV show or not, the themed 90 ball game has more to offer than a standard 90 ball game. There are no less than FIVE chances to win available when playing Emmerdale Bingo.

You can win the one line, the two lines, the full house and then five location-based jackpots and a Country Miles prize.

The Country Miles prize is only available to those who have purchased at least six tickets in the game. The other prizes can be one with just one ticket purchased.

Full details of how to play and how each of the prizes can be won will be available at Gala Bingo – the only site to offer this themed game.

Coronation Street Bingo is only available to play at Gala Bingo and like Emmerdale Bingo, features extra bonuses and chances to win. For full details, visit Gala Bingo.

If you’re a Microgaming slots fan, specifically Immortal Romance, then this themed bingo game is for you. It plays on a traditional 90 ball bingo board but boasts bonus modes and features.

You get to choose which mode you play – the traditional game or a spin-off version that has one of the characters from the slot featured.

Full details of what the game has to offer you can be found at Butlers Bingo.

Tombola is the brand that goes all out to bring you unique bingo game types and below are just a few examples of what they have to offer. This is not an exhaustive list, for more details you would need to visit their site directly.

Blocks - How to Play

There are so many bingo variants available online that you are spoilt for choice. The selection we have covered on this page is by no means exhaustive; we haven’t even touched on the card-based games that are available at many different brands!

With competition high in the world of online bingo, there are always going to be new and innovative games added to the landscape in an effort to ensure that you, the player, are kept entertained and spending.