For those who are not sure whether it’s two little ducks (22)  or two fat ladies (88) , this bingo calls guide will prove essential before playing another game of bingo at any bingo site.

It is extremely common for bingo callers to use a variety of words or phrases in place of the actual number which has been drawn out, this is quite often referred to as ‘bingo lingo.’

It might seem a little daunting if you have never heard of, or do not understand this concept, but this easy to understand lingo can be learned pretty quickly.

Click on the image to see a larger version of the bingo calls 1-90 in a cool infographic. 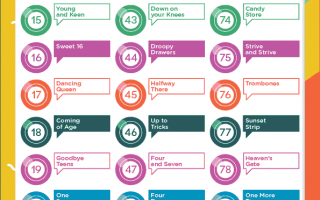 And just when you think you’ve got your head around the bingo lingo with the traditional bingo calls, along comes the new, rude and often crude bingo calls!

New forms of bingo are taking place all across the globe and the UK has it’s very own 21st century version with Bongo’s Bingo.

We have designed a detailed list of phrases from bingo lingo which will be regularly heard in bingo halls across the land, in which we have included all the numbers from 1 to 90. Whilst this list refers to the traditional names for the numbers, it is worth noting that there may be slight variations depending on where you are playing.

Bingo lingo tends to remain universal, on the whole, however there might be differences in different localities and some of the best bingo sites inventing their own version of bingo lingo which is exclusive to them.

There are some examples of bingo lingo that have a bit more of an interesting back story, for example the lingo associated with the number 10 makes reference to the address, 10 Downing street, which is the residence of the current prime minister. That means that the lingo for number 10 will change according to who is currently in residence.

The idea behind this bingo language is to add a little humour to the game, however some of them can be a little saucy, depending on how you interpret them. Take the call for number 69 for example, ‘either way up.’ We’ll leave that up to your imagination!

There’s quite a number of rude bingo calls, and some people might find them to be offensive. We’re sorry if you’re offended. We’re just providing a resource of information!

The Sun Newspaper published an article on 22nd Jan 2020 suggesting that Millennials and Generation Z bingo players were changing the traditional bingo calls for more up-t0-date versions, which isn’t going down well with the older bingo players.

Here’s some of the bingo calls that were changed. Image courtesy of Sun Newspaper which also publishes the Sun Bingo Numbers every day.

The history behind the bingo call

The bingo call was an idea which originally came from the attempts of bingo callers to grab the attention of people playing inside a very loud bingo hall, this would keep the players interested. Nowadays, most bingo games are done electronically and so the need for bingo calls has diminished greatly. However, most bingo sites online will still use them as a way of keeping the history of the game alive and well.

With the bingo call being a highly historical concept, some of these names, which find their origins in the 1950s, do not make much sense to the younger generations. An example of this is the call for the number six from back in the day which is ‘Tom Mix.’ This was a reference to an actor who starred in many Western films during the silent movie era, which today’s players would have no knowledge of.

To tackle this issue, holiday camp giant, Butlin’s made an attempt at invented it’s own fresh bingo calls into play in 2003. The idea was to bring the game up to date and make it inclusive fro younger players. Some examples of these new calls were ‘J-Lo’s Bum’ which referred to the number 71. ‘Ali G’ to represent the number 30 and ‘Gareth Gates’ for the number 8.

In more recent years, Mecca Bingo gave another makeover to the traditional bingo lingo in order to bring them even more in line with the times. The original ‘Tom MIx’ was scrapped and ‘Little MIx‘ is now being used in his place.

The number 8 has even lost it’s associated with Gareth Gates and now goes by the pseudonym ‘Tinder date.’ ‘Selfie Queen‘ has taken over for the number 17 and the number 48 can now be heard as being called ‘Tag a mate.’

The most interesting thing about this revamp was that Mecca involved their online players in the decision of the new names by creating polls on social media, and it went down a storm!

There seems to be a bit of a buzz on the internet about bingo calls being made in the Yorkshire accent. And while there isn’t an official list of calls in this often difficult to understand accent, I’m sure you could make some up. Or failing that, why not visit a local bingo hall in Yorkshire and get a feel for the accent yourselves!

It simply would not be the same to play a game of bingo without the much loved bingo calls, and even with the new ones coming through and the increasing use of electronic bingo, we would like to think that the bingo call will forever be a part of the game.

Our favourite bingo call has got to be ‘Grandma’s getting frisky’ as a call for number 60, but for those who prefer something a little less risque, there is still the option to refer to it as ‘five dozen.’

Now that you have a good knowledge of bingo lingo, perhaps you are keen to put it into action. So why not choose a new bingo site to play? This is a great place to hear the calls in action, bag some great bingo deals as well as getting involved in a good old fashioned game of online bingo!

Got any bingo calls of your own that we should know about? Leave us a comment. Don’t be too rude!

We will be happy to hear your thoughts